I woke up because of something I had omitted from my blog update yesterday. Quite literally actually… That gentle humming noise that I could hear from within our Rocherpan eco-cabin as I awoke was in fact the sound of a passing Sishen-Saldanha train. Local reports had the train at between 3kms & 7kms long and that when the train departed, the front carriage was at a brisk 11km’s per hour before the back engine even started moving! Other tales told of how along the route the locomotives could not actually come to a complete stop & so changes of staff were facilitated through a rolling substitution – slowing the procession to 6km/h while old staff jump off the still-moving train while the new staff would run alongside and jump on. A quick Google search confirmed that in fact the longest train on this route was indeed 7.5Kms long (with 660 wagons, carrying almost 69 thousand tons of iron ore!) but that most trains on the line today are 3.7kms long with 342 wagons and requiring 8 locomotives/engines interspersed amongst the wagons to drive it along (still the longest production trains in the world!) That’s right, the train itself is over 3kms long! The sight of the train simply chugging along the line with a seemingly endless run of wagons taking minutes to pass is something that truly boggles the mind when you stop to really think about the sheer magnitude of this engineering feat. 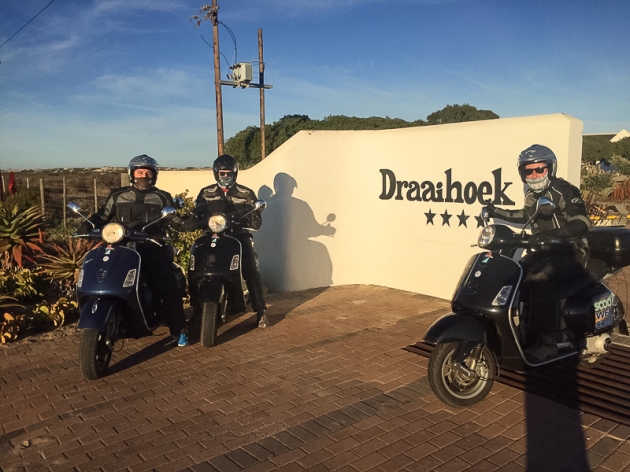 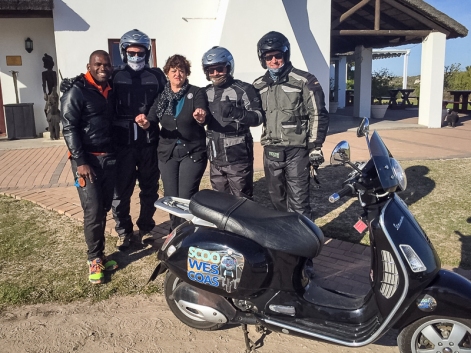 Morning of Day 4 and we’re half way through! Wow, time has flown by. Once out of our cozy beds, we needed to suit up to get to breakfast, again at the very hospitable Draaihoek Lodge. Wisps of condensing steam escaped our mouths as we readied ourselves & breathed the somewhat fresh morning air. By the time we arrived at Draaihoek Lodge about 20 minutes later I simply could not feel my fingers. No wonder, as Dwain informed me that his car’s thermometer had registered our departing temperature at a mere 4 degrees! Nothing that cradling a warm cup of tea couldn’t cure though 🙂 A direct quote from Rory during breakfast -> “the best French toast and fresh honey I have ever had in my life!!” Added to this, some rather exotic fruit (Star Anise, Prickly Pear & a very interesting fruit called Persimmon or ‘Sharon Fruit’ that looks like a tomato but has a very distinctive sweet taste) and the standard hot breakfast staple of eggs, bacon and accompaniments & the certainty of me returning in need of a new belt continued.

With well-satisfied bellies, we took to the road again and with Siv regrettably heading back to Cape Town in the evening for other work commitments (he will be back tomorrow, have no fear) he was forced to follow in his car. This meant that Rory was upgraded to a 200cc bike (he had been riding a 125cc up until this point) and the gusto with which he took to the fresh road was proof that he had really grown tired of all the “why do we have to keep slowing down for you?” comments thus far. We simply couldn’t keep him off the front of the peloton! Rory’s ungoverned freedom was rather short-lived though as Black Beauty coughed and spluttered her lime-green radiator life blood onto the R365 (Die poegie het gespoeg, hence Rory’s new nickname ‘spoegie-man’ ). Earlier we’d reached a T-junction that had two routes to our next destination, Lambert’s Bay – one was dirt road and the other, a slightly longer tar route. With guns-blazing Rory at the helm, we decided the tar road would be better and it was only after this detour road too turned into a dirt road that we realised we had missed a turn somewhere. I think the combination of getting lost and the hot mid-day sun conspired to end in Rory having simply pushed his stallion too far and after a formula-1-type bike change, Rory was back on his trusty 125 – aka ‘The Chocolate Log’

A little behind schedule (again!) we arrived in Lambert’s Bay and were shown around the harbor, outside of which is a ‘moerse’ Cape Gannet colony known as Bird Island. We observed the rather territorial behavior of the adults amongst a tightly knit living area, as well as the first tentative flaps of juvenile birds, yet to take their first flight. Just beyond these sea-faring birds was a colony of Cape Fur seals that actually need to be controlled by Cape Nature as they will invade the breeding area of the Cape Gannets and could have a detrimental effect on the bird population. An uneasy truce exists between the rocky outcroppings and the main land, tightly policed by the conservationists that look after the island. 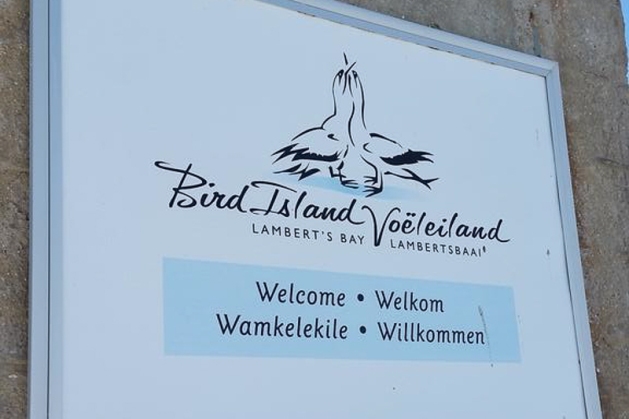 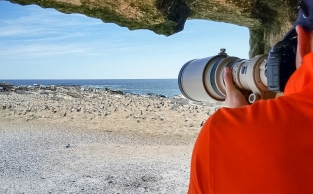 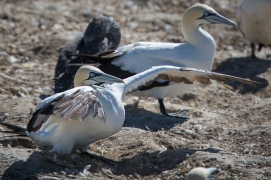 From bird watching to wine tasting as we sampled some fine Sir Lambert & Kookfontein Savignon Blancs at the Mad Hatter restaurant. Originally potato farmers (Lambert’s Bay is renowned for their potato production) these visionaries realised that the climate was ideal for Savignon Blanc and so they planted grapes on portions of their farms. This has resulted in the fine boutique wine that we sampled today which is available throughout Lambert’s Bay (& Lufthansa flights if you are after the Sir Lambert) as well as at Wine Concepts and Salisbury Deli in Woodstock, Cape Town. The actual wine-making takes place at Friar’s Cove which is somewhere we will be visiting tomorrow and that boasts a very unique sea-water fermentation process – tune in tomorrow to find out more 🙂 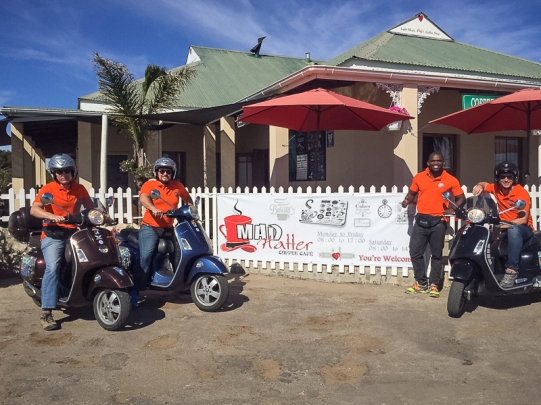 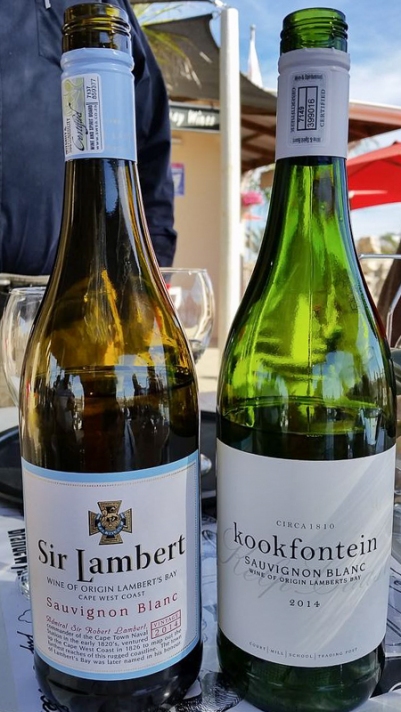 The flat & straight roads of the coast gently gave way to the more undulating & winding roads of the Cederberg foothills. A hop, skip & a scoot from Lambert’s to Clanwilliam (formerly Jan Dissels Vlei prior to 1814) for some rock art history. A very informative Clanwilliam Tourism guide named David, took us to the unmarked site of the paintings and explained how these had come to be there, some 1000 to 2000 years ago. Basically the shaman of the tribe would go into a trance with the help of the entire tribe (group dancing and chanting and so on…) and once out of this trance he would paint the visions he had seen. The occasions giving rise to these “trance dances” (very different to those frequented by today’s youth) would be simple necessities such as food, water and health – the Shamans would dance to control the movement of animals in the region, summon rain & even to heal the sick. The paintings themselves, although in a rather cramped out-of-the-way rocky outcropping, are really very clear compared to others I have seen and if bushman history is something that speaks to you then you definitely need to visit Clanwilliam – and probably before some of the sites are covered by water thanks to the new dam construction! 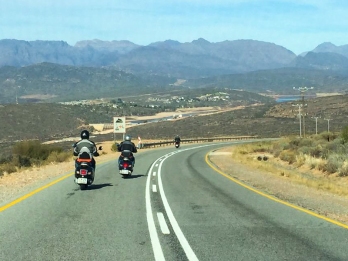 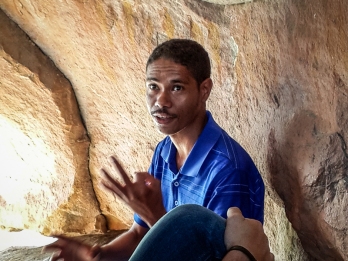 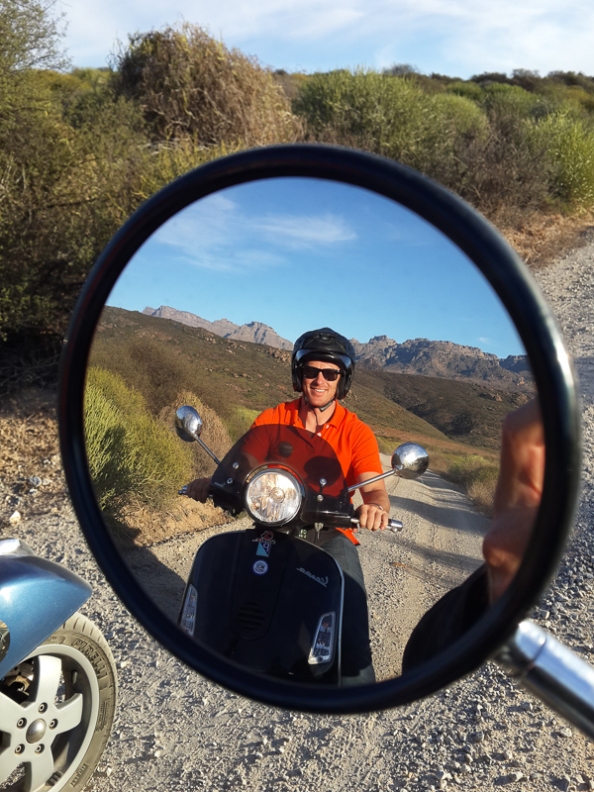 From Clanwilliam on to Vredendal. This has undoubtedly been our longest day of actually riding on the scooters and we had covered some serious ground during the day. On the rather long stretch into Vredendal, with an aching back and rather tired eyelids, we made our way steadily back towards the coast (at the max speed of a 125cc Vespa which around 100Km/h) There truly is something magical about the fading light on the West Coast and as we made our way into Vredendal at dusk, despite desperately road-weary bodies, I couldn’t help but be consoled by the gentle warm coastal air and the golden light and I experienced and almost out-of-body calming as we wound our way to the end of the day. 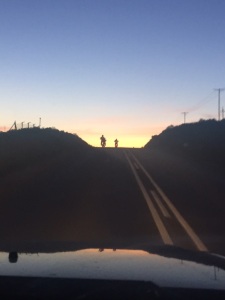 Arriving at Tharrakamma Guesthouse I wanted nothing but my bed. We’d been booked to have dinner at Namaqua winery at Die Keldery restaurant though and so with barely a glimpse of my bed, we were off to dinner. Monika met us at the door and introduced us to the local wine makers – Roelof & Len. The longing for my bed soon disappeared with the friendliness and genuine human warmth that our hosts greeted us with. Monika even commented that she had been following our exploits thus far and was very worried that they wouldn’t measure up to all the activities as they were simply serving us dinner. Can I just say that it was the best night of our tour so far! Kicked off by some local children performing Riel dancing for us – stemming from a kind of melting pot of cultures from Griqua to San to Voortrekker, the fleet-footed dancers pranced around the outdoor dance floor with very animal-like movements (the San influence shining through) to a typical West Coast, David Kramer-style music. 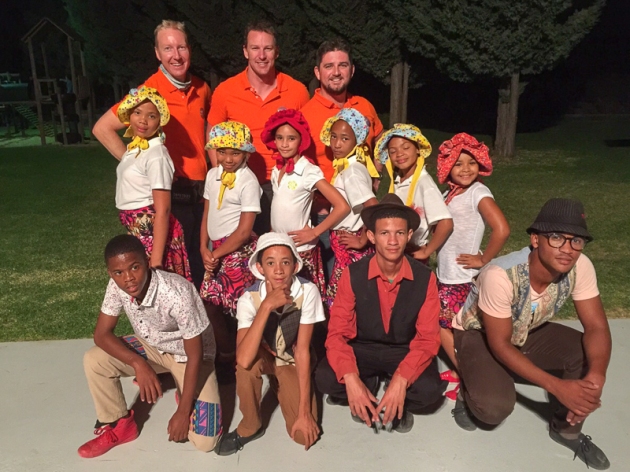 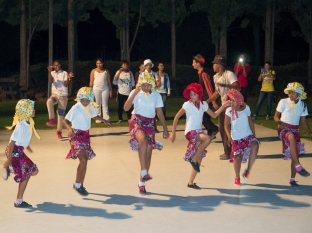 Roelof van Schalkwyk from the neighboring Klawar winery brought with him a very easy-drinking Chenin Blanc to start us off on our wine tasting. This was accompanied by a light green salad with parma ham & the most delicious cranberry-infused feta cheese. The main was a hearty rib & chip combo. A very welcome change to the seemingly endless seafood fare we had enjoyed to date. Not that the seafood hasn’t been amazing, just that meat is meat & a man must eat! If you know what I’m saying…

Find of the week simply has to be the twin to ‘Jonathan’ of Radio Raps fame (if you haven’t heard of Jonathan before then do yourself a favour and search for “Jonathan se golflesse” on Youtube right now – absolutely hysterical) His real name of course is Len Knoetze and he is the production manager of Namaqua wines. His simple approach to wine as a means of enjoyment meant that while his passion for quality is clear, he doesn’t mind showing the lighter side of things, most often through mixed metaphors such as “It bears fruit like a rabbit!” when describing the Chenin Blanc varietal that dominates the region. If I am blatantly honest, the only Namaqua wines I could think of off the top of my head are the ones that come in boxes. I discovered though there is so much more to the wine farm than this & Len himself even refers to the “the dark side” of box wine that makes all his experimentation and genius in his “chateau” possible. We sampled a particularly fantastic limited release Pinotage that is well worth adding to your wine collection. He also noted that Namaqua wines, up until about 2007, processed more tonnage than the whole of New Zealand – over 100,000 tons. Now that’s a lot of wine!! A large amount of this is exported to all over the world so that everyone can enjoy the wine, in line with Len’s philosophy. 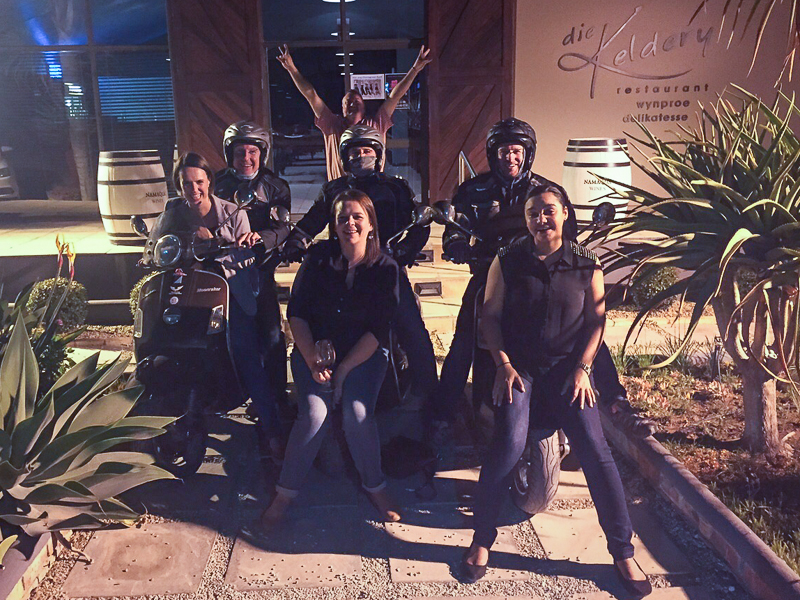 Out and out my favourite night of the tour so far & hence this slightly longer blog post and my 1am bed time. True West Coast hospitality with some simple ingredients: Good food, great wine and ‘lekker kuier’ 🙂 I am sure that this isn’t the last time I’ll be sharing a meal with Len “C’mon boys” Koetze Traveller’s tip: (courtesy of Len) Wine needs to breath, boys. So sometimes you need to give it mouth to mouth.