Paging through the official event magazine for this year’s Cycle Tour I came across this advert for the West Coast National Park and just thought I’d share it because, well, the image is a photograph I took on a clear morning back in 2012 just after sunrise.

That aside, I have oiled my chain one last time and my bicycle is in the car ready for the World’s Largest Timed Cycle Race tomorrow, the 2014 Cape Argus Pick n Pay Momentum Cycle Tour, known to most simply as the Argus. It’s a 109km cycle race around  the Cape Peninsula and every year approximately 35000 cyclists take part. For years after moving to Cape Town I would go out and watch the seemingly endless stream of cyclists whizzing past when I decided I’d really like to be one of them and I was hooked. I feel like you can’t call yourself a Capetonian if you haven’t ridden the Argus. I have missed the past couple of years, having been out of the country or travelling so I’m looking forward to being back on the road again. Despite starting in the third last group, because I didn’t do any of the seeding races, the weather forecast is looking favourable. It isn’t going be too hot and the dreaded south-easterly wind is supposed to not be gale force. I am known for never doing much training for events like these but I feel like I am fitter than I’ve been for a while and I will be aiming for a sub 4hr 30min time tomorrow. See you on the road Cape Town…

Update: The official results are in and even though the wind made for tough conditions on the day I achieved my goal finishing in 4 hrs & 26 mins with an average speed of 24.58 km/h and finished 21st out of the 518 in my start group. I even had time to stop and chat with my friend Guy McDonald who was MC at the Tsogo Sun supporters spot in Camps Bay and took this pic of me with some of the cheerleaders on the side of the road. All in all a good Argus and a time to beat for next year.

In the continuation of series of weekends away with SANParks our group was reunited on Signal Hill where we loaded up the trailer and started out on our journey to Agulhas National Park.

April in the Cape can be a bit of a gamble weather wise, it’s either cold and wet or it’s warm and sunny. As you can see it was absolutely stunning as we left Cape Town and just three hours later we arrived at Lagoon House, where some of us stayed whilst others were in the Rest Camp. The location of Lagoon House is END_OF_DOCUMENT_TOKEN_TO_BE_REPLACED

On a recent holiday in the Kgalagadi Transfrontier Park we decided to give ourselves a break from sleeping on inflatable mattresses and stay at the Bitterpan Wilderness Camp. This exclusive camp is elevated above the red sand dunes of the Kalahari and situated on a one way only 4×4 route. Half way between the Nossob and Mata-Mata, this camp is in the center of the wilderness and seemingly in the middle of nowhere. About a two and a half hour drive from Nossob, up and over dune after dune, we couldn’t believe our eyes as we pulled up to this tented camp. Looking out over this brilliant white salt pan surrounded by red dunes was just surreal. Watching the clouds grow and dissipate over the pan I thought it would make a great timelapse so set up my camera to take a shot every 15 seconds for about 5 hours from mid afternoon till after sunset.

NB: Look out for the pride of lion that cross the pan to come to the water hole and their attempt to catch a lone eland about half way through the video.

Waking up in Wilderness

Last weekend Guy McDonald and I travelled to the Garden Route area for the final round of the National Rally Championship. Friday’s stages were in George while Saturday’s were to be in Knysna so we decided to stay in Wilderness, right in the middle of the action. Set behind the seaside village, along the banks of the Touw River is the Wilderness section of the Garden Route National Park where you can either camp under the stars or stay in the log cabins like we did. 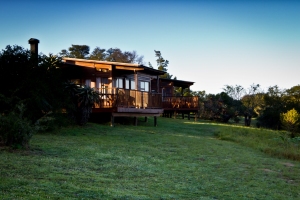 Once again I was up early. I opened up the curtains to see clear skies and quickly got ready to explore one of the hiking trails while the others slept late. Although the grass lining the path was wet from the overnight rain and my pant legs were soon soaked it was too nice a morning to turn back early. The path soon opened up and I managed to make it to the viewing deck, on the Bushbuck trail, where I took some time to just sit in the stillness of the morning watching the fish feeding in the shallows while the rising sun bathed the opposite bank in light – a peace that you can’t find in the city.

I would have stayed longer but our tour was due to start at 9am and I still had to get back to the chalets. While it might not have the big five, one of the attractions of the Bontebok National Park is that you can walk freely without having to worry about dangerous wild animals as well as being able to get up close to some of the fynbos. It is also one of the last remaining ‘renosterveld islands’ with several endemic plant species.

Back at the chalet, while I was packing the last of my things, this opportunistic little bird was hovering around on the balcony waiting to be invited in for tea. Quickly reaching for my camera, I caught this interesting shot as he END_OF_DOCUMENT_TOKEN_TO_BE_REPLACED 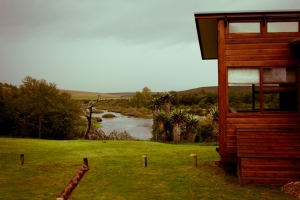 It was the coldest and wettest day we’ve had this winter in Cape Town and there was some doubt as to how enjoyable our weekend away was going to be at the Bontebok National Park, just outside Swellendam, but I for one was looking forward to getting away and the chance to unwind, whatever the weather. While it rained for most of the 240km journey out along the N2 and was still drizzling when we arrived, all of our spirits were lifted as we were dropped off at our awesome wooden chalets overlooking the Breede River and we were excited to see that they had heaters in them too.

The chalets at Lang Elsie’s Kraal Rest Camp are fully equipped and are ideal for two adults but can accommodate more by use of a sleeper couch. Each one has an outside deck with covered braai area and the hiking trails start at your doorstep.

Having unpacked, settled in and put on another layer of warmth we headed to Die Stroom function facility, where we had a braai with Bulelwa, the Park Manager and some of the rangers. As we sat around the table we got to know more about the park and END_OF_DOCUMENT_TOKEN_TO_BE_REPLACED

Hiking to the top of Elsie’s Peak for panoramic views

As you may or may not know I’ve been spending quite a lot of my time working on my photography recently and have started a new blog to showcase my best images so if you haven’t already go check them out at Rory Alexander Photography.

Anyway, on to this post, a hike which I did back in March.

It was a public holiday and we had to work because of deadlines looming but instead of wasting the entire day we decided to go for a quick early morning hike and then start working. Needless to say it was well worth it with awesome views over END_OF_DOCUMENT_TOKEN_TO_BE_REPLACED 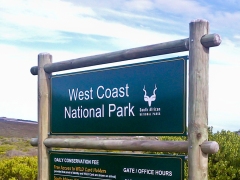 Quad biking, sand boarding, bird watching and delicious seafood are just some of the attractions of the West Coast outside of the flower season. This last weekend we got to experience a selection of these as guests of SANParks on  a weekend of discovery.

We all met up at the SANParks offices in Kirstenbosch gardens from where we were taken by the Green Cab to our base for the weekend, the West Coast National Park. As much as I like driving it was actually a pleasure to be driven and before we knew it we had arrived at the park which is just 120km  outside of Cape Town, perfect for a weekend away. There are several options of accommodation within the park and we stayed at the Duinepos Chalets nestled in amongst the natural fynbos.

After dropping our bags we went out for a quick tour of the park and to the lagoon for a swim as it was a very warm day despite the cloud that was blowing in off the Atlantic Ocean. While the West Coast National Park may not be able to boast the big five it is home to several of the smaller cats like the caracal and African Wildcat as well as several antelope such as springbok, eland, red hartebeest, bontebok and my favourite, kudu, which we were lucky enough to see.

Anyone who has visited Cape Town will know just how cold the Atlantic Ocean is.  Even in summer, the beaches are packed but there are very few people in the water. The Langebaan lagoon however is usually several degrees warmer making it a great destination for water lovers and some of our group took full advantage of this. END_OF_DOCUMENT_TOKEN_TO_BE_REPLACED