Day 7. The final day of the Scoot West Coast tour… While general maintenance at the Riebeek Valley Hotel may have been neglected a little, the kitchen certainly hasn’t been and a delicious breakfast buffet spread awaited us as we leisurely began the day. If you do happen to find yourself at the hotel then try the scones – sensational!! With only a single item left on the itinerary, it felt strange to be waking up a little later and not being pressed for time to cram things in. 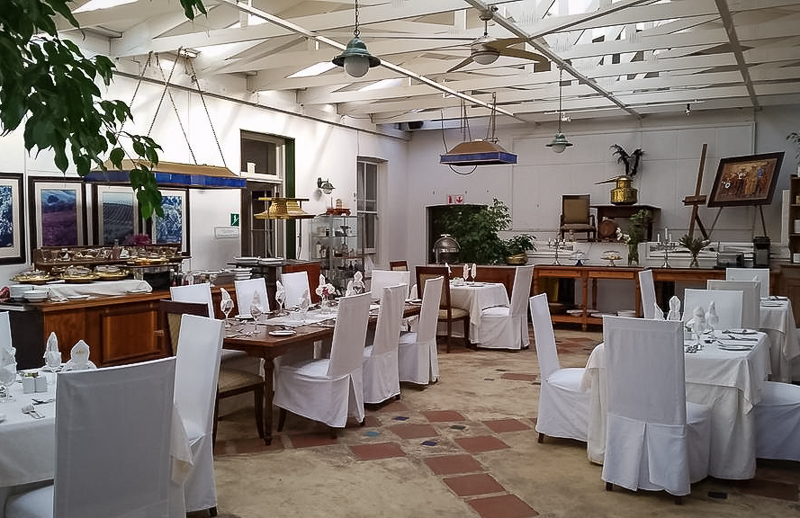 I say only a single item, but it was perhaps the biggest item that I think you will find on most people’s bucket lists. Skydiving! Not far from Riebeek West, just outside Malmesbury, lies a new ‘drop zone’ which has taken the operator, Mike Rumble, around 2 years to fully register and license given its relative close proximity to not only Cape Town international airport but also the Langebaanweg air force base.

As we arrived at the airfield, we had our first & only scooter ‘crash’ of the trip (quite an improvement from last year which saw 2 crashes on the very first day! We’re proud of you for not falling once this year, Guy…) Siv “shortstop” Ngesi was navigating the dirt road towards the runway and hit a patch of soft sand that caused his back tyre to skid out from under him and the scooter to collapse on its side as Siv spilled out onto the road next to it. Whatever nerves may have been building up in the boys were instantly released in hearty guffaws of laughter as Siv scrambled to his feet, dusted himself off and righted the fallen scooter.

With a very experienced and knowledgeable crew, the Mother City Skydiving company do everything to put you at ease in what can be a trying time leading up to throwing yourself out of a perfectly good aeroplane. I have done a tandem skydive once before (albeit about 7 years ago) so I knew roughly what to expect, but fellow jumpers Dwain & Siv were doing this for their first time ever. As we were discussing the processes and procedures, we heard the faint buzzing of a plane and squinted up into the clear blue sky to see if we could see the source. A squawk on the radio indicated they were 4 miles out & moments later we saw the plane as a mere spec waaaaay up in the sky. Linda Mase, Manager: Domestic & SMME Marketing at Wesgro, who has been with us this whole tour, is a man of few words. When Mike explained that we should keep our eyes on the plane as people were about to jump out of it, he looked back into the sky and incredulously said “ F-f-f-f-f-from there!?”

It is quite a process of harnessing, packing parachutes and sometimes refueling the plane when it comes to skydiving. We had to wait quite a while on the ground as the small plane can only take 2 jumpers (& their tandem instructors) at a time. I’m not sure this is a good thing as the time allows you to further contemplate your decision to toss yourself from a moving plane at 10,000 feet in the air! 🙂 We weren’t about to back down now though and Siv was up first. His jump was broadcast back to us via a handheld radio that he had taken with him and you could sense his building excitement as the plane took the required 15-20 mins after takeoff to reach the required height. He yelled into the mic that his goggles were going on, they were about to jump and he’d chat to us again when he was under the parachute following the 30 second free-fall. We all watched closely as his small dot trailing the plane grew larger and larger until we saw a successfully deployed chute. The next sound over the radio was a mixture between an excited little schoolboy’s adrenaline-filled voice and rushing wind. The smile on Siv’s face as they returned safely to terra firma was positively beaming and seemingly frozen on his face as he continued to flash those pearly whites at all around him. 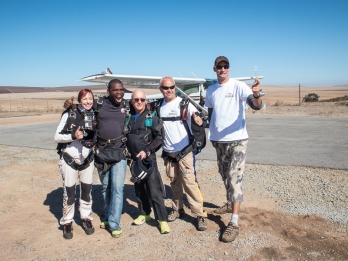 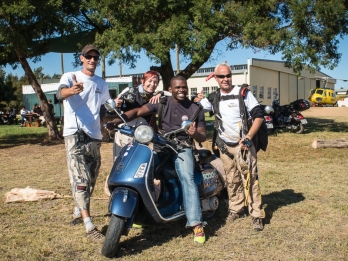 Next up were Dwain & I. Strapped tightly to another man is never a comfortable way to travel, but with Graham & Fred’s thousands of jumps each, I think both Dwain and I were more than happy to have them along. They are amazing at distracting you with small talk and the occasional pose for the cameras that they both have strapped to their arms to keep the nervousness to a manageable level. A last-minute safety recap, harness check, goggles on & the call to the ground station – 2 minutes. Dwain and I gave each other a final glance and thumbs up as we realised it was go time. Fred opened the door and that’s when I thought to myself “Damn! S… just got real!” You don’t have much time to think about it though as Fred & Dwain dangled out the door and an instant later were gone from view. Graham and I scuttled back, I dangled my legs into the blasting wind and with a quick look up and left to a smiley face sticker plastered on the underside of the wing, we too were off. 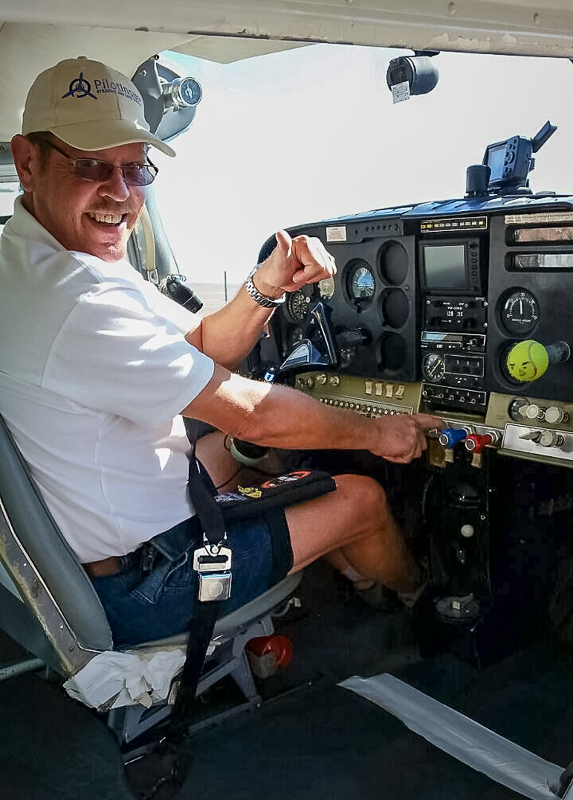 It’s nearly impossible to actually describe the sensation of skydiving as anyone who has done it will tell you. All I’ll say is its loud. And fast. And crazy. And over all too quickly! The wind rushes fiercely past your face as you try to take in all the sights (it was a clear day so you could see all the way back to Table Mountain and out to Dassen Island) In an instant, you are 5,000 feet lower and the free fall is over as the parachute deploys above you. The silence that follows is an amazing contrast to the blood-pumping rush of freefall. Following a quick check that all the lines were in the right place, we turned sharply to accelerate our fall and levelled out next to Dwain & Fred. Skillfully maneuvering the chutes, they brought us within metres of each other and Dwain and I exchanged whoops of delight as we touched parachutes and then broke away from each other again. Graham then casually handed me the reins to the parachute and said I was in charge. A hard yank with my right hand sent us spirally downward giving a rollercoaster feel as my stomach floated somewhere near my molars. Some more sharp turns later and I reluctantly handed back the guide ropes so that Graham could bring us in to land.

Safely back on the ground I can only say that I felt fuzzy and alive. No doubt the result of all the adrenaline still coursing through my veins. A truly amazing, wonderful and exceptional experience. At R1,900 for a jump it is certainly not going to be an everyday occurrence but I can assure you it is well worth the money and you have to at least try it once.

So that’s it – we’re done. All that’s left to do is thank Wesgro and Discoverctwc for their foresight in sponsoring this epic scoot adventure and reminisce about our experiences. Almost a full week after departing Cape Town on a blustery winter morning, we’ve traversed the Cape West Coast, met so many interesting people, done some fantastic activities, tasted some delicious things (as well as some not so delicious things) but overall have re-discovered what is available to us in our own back yard. I hope everyone has enjoyed following our exploits and has learnt a thing or two in the process and already have plans to try somewhere new on your next holiday. I’ll also be writing a wrap up piece on what the week’s experiences have meant to me personally so stay tuned but until then it’s farewell from a weary West Coast scooter who is happy to once again be sleeping in his own bed tonight. Ciao!

This entry was posted on May 10, 2015 by Rory Alexander Photography. It was filed under Adventure, Travel and was tagged with adventure, Cape Town, friends, Malmesbury, outdoors, scooter, Scootwestcoast, skydiving, South Africa, Vespa, Wesgro, West Coast.